Are You Planning For an Online Marriage/Online Nikah?

There are a few things to consider if you are planning to get married.

First, is it permissible for you to be married online through an attorney/vakil according to your religion? The answer is yes. According to all Islamic schools of thought, marriage through an attorney—or vakil—is allowed in Islam. This makes online marriage a viable option for those who may have previously considered themselves unable to marry outside their faith, tribe, caste, or country.

In Pakistan, every adult has the right to marry whoever he/she chooses

Second, is online marriage legal where you live? In Pakistan, it is constitutional law that every adult has the right to marry whomever he/she chooses with free will and without pressure or coercion from others. With this in mind, it’s worth noting that if you’re considering an online marriage in Pakistan or elsewhere, it is important that you consult local lawyers before going ahead with any plans.

Finally, how much does an online marriage cost? Online marriages are almost 25 times cheaper than traditional Pakistani weddings! The average price of an online wedding is less than $200 USD, while the average price of a traditional Pakistani wedding ceremony for a middle-class family is $5000 USD according to a rough calculation. This is the reason that Online Marriage & Online Nikah with 100% Legal Documents. Online Marriages in Karachi and Islamabad are being done every day. Online Marriage. Our online marriage/online Nikah fee is not fixed, but it depends upon the nature of the case. Please remember that  a lawyer’s fee is normally includes all other costs incurred such as attested power of attorney, Nikah Khawan’s fee for online Nikah, Nikah Registration fee, Lawyer’s fee, registered Nikah Nama and NADRA Marriage Registration Certificate.

Online Marriage and Online Nikah is Valid in Islam & Pakistan.

Online Marriage in Pakistan or Online Nikah can be done within 22 minutes or even earlier!

Our matrimonial expert lawyers in Karachi, Lahore & Islamabad are providing online marriage for online Nikah services for decades to Pakistanis living in Saudi Arabia (KSA), the UK, the USA, Canada, Australia and other several countries. 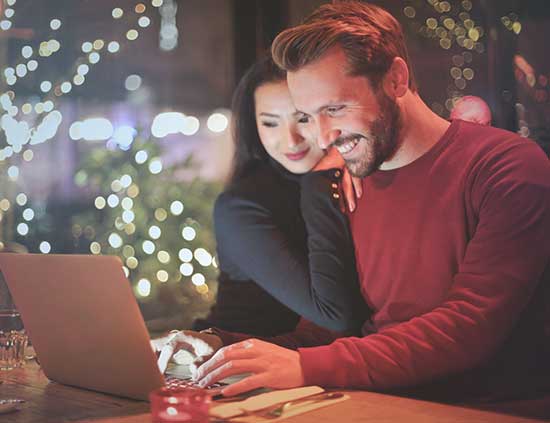 Online Marriage in Pakistan or Online Nikah can be done within 22 minutes or even earlier!

Our matrimonial expert lawyers in Karachi, Lahore & Islamabad are providing online marriage for online Nikah services for decades to Pakistanis living in Saudi Arabia (KSA), the UK, the USA, Canada, Australia and other several countries.

Online Marriage/Nikah is a Necessity in This Era

The initiation of online marriage/nikah has changed the course of marriages.

Online marriage/Nikah is a necessity in this era. The initiation of online marriage/Nikah has changed the course of marriages. This advancement in technology made it possible for people to find a life partner without having to go anywhere physically, which is vital if you live in a small town or village, or if you’re busy with work and don’t have much free time on your hands.

Online marriage procures to the needs of people.

Online marriage procures the needs of people. It is a great way to get the Nikah done without any hassle. This is one reason why online marriage has become so popular in today’s society. Online marriage and online nikah with marriage certificates in Karachi and Islamabad are being done daily. Online Marriage/Nikah takes just 22 minutes.

Online Nikah is an arrangement of blessings for individuals and their parents.

Online Nikah is a blessing to the community and the Muslim nation because it brings people closer together and helps them to enhance their relationships with one another. It also encourages people of different countries to come together, regardless of race or religion by conducting this online service in such a way that all Muslims can join hands in this holy effort without any hesitation whatsoever. It is a necessity to get married online in this era. People have started to think about the idea of online marriage as it is not only a blessing but also saves time and money. With online Marriage/Nikah, one doesn't need to worry about any marriage problems

Online marriage is a necessity in this era. With online Nikah, one doesn’t need to worry about any marriage problems and make it possible within a few minutes. Online Nikah is a great way to marry and save time and money.

With the help of online Nikah sites, one can also meet people from all over the world who might be living in different cultures and traditions but share similar interests as yours such as music or sports etc., which may bring two different individuals together into one family through marriage with all its responsibilities towards each other’s lives together as husband-wife parents children etc.

Our professional team understands your requirements and needs

Nikah is a Legal Islamic Marriage Contract. Muslim Marriages should have a Vakil/ Lawyer In Islam, an online marriage or online nikah can only be considered valid if one party or both marrying parties have appointed Vakeel/attorney/proxy to represent them at the time of Nikah and sign the Nikah Nama on their behalf. As the Prophet of Islam, Hazrat Muhammad (PBUH) had married through Vakeel/attorney with Hazrat Bibi Umm-e-Habiba, daughter of Abu Sufiyan, while she was in Abyssinia and He (PBUH) was in Mecca.  So Islamic Shari’a (All four Sunni and Shia School of Thought) also permits Online marriage/Nikah which makes it acceptable by legal as well as the sharia laws.

Online marriage or online Nikah is the practice of getting married via the internet. Online Nikah or online marriage has become a popular trend in recent years, especially among young people who are looking to avoid the expenses that come with traditional nuptials. In Pakistan, online marriage is legal and valid. But it is important to note that there are certain requirements that must be met in order for your wedding to be recognized as such by the state.

According to the Pakistan Penal Code and other laws, it is illegal to enter into a marriage contract without the consent of both parties. The parents or guardians of the bride and groom can act on behalf of their children, but they must obtain permission from their children before doing so. A nikah must also be performed in front of two witnesses, who must be present at the ceremony. You must make sure that your partner meets all the requirements set forth by Pakistani law. This includes age, and registration at the relevant government office. Once you have confirmed these things with your intended spouse, then you can proceed with the rest of your plans for an online wedding ceremony.

Online Marriage or Online Nikah is an Accepted Practice in Pakistan

Online marriage/online nikah has become a common phenomenon in our society. It is an accepted practice to have a nikah conducted over the internet in Pakistan and many other countries as well. The reasons for this are many. Some people feel that it is a convenient way to conduct their marriage, while others think it is a good option for women who are afraid to go out of their houses or who may be unable to find someone from their community or city who can perform their nikah.

Online Nikah should be registered with the Nikah Registrar

You will also need to register for Nikah with a local Nikah Registrar office after you can get married legally as per Islamic law in Pakistan.

Registration of Nikah online /marriage in Pakistan is mandatory. It is not necessary that both, the female and male should be Pakistani citizens. Rather, if any of the spouses is a Pakistani citizen, then they can register their online marriage (Nikah) in Pakistan.

Can a Muslim Girl Marry without WALI through Online Marriage/Nikah in Pakistan?

Without the consent of Wali’, a sui juris Muslim female can enter into a valid online Nikah/marriage of her own free will.

“Under Islamic law, both male and female have the right to contract offline or online marriage with their own free will, and their life is protected under Article 35 of the Constitution”. (Lahore High Court)

Is Wali Required For Online Marriage (Nikah Online) in Pakistan?

In Middle Eastern countries like Saudi Arabia, U.A.E., Oman, Iraq, etc. there is a requirement of a wali of the bride for the marriage. However, there is no such requirement in Pakistani Marriage laws. Therefore, no wali is required for online marriage (Nikah) in Pakistan. However, according to the new clause which has been added in Pakistani Nikahnama, the Vakeel / Attorney / Proxy / Representatives on behalf of the couple are required.

Online Marriage and online nikah are the necessity of this era. With online nikah & marriage, you can save money

You can get married online through an online nikah for as little expense as a fraction of an air ticket price. Online marriage & online nikah is a necessities of this era. By way of online marriage or online nikah, you also save a lot of your precious time. Just 20 minutes are required for an online marriage with online nikah solemnization. Please note that online marriage and nikah online are not “BIDDAT” (a newly inserted idea in Islam) but Nikah through attorney/proxy/vakeel was adopted by the Prophet of Islam, by himself to marry Hazrat Bibi Umme-Habiba (Ramla) daughter of Abu Sufiyan.
“In 627, Muhammad sent a proposal of marriage to Ramla on the day she completed her iddah, a widow’s waiting period. The marriage ceremony took place in Abyssinia even though Muhammad wasn’t present. Ramla chose Khalid ibn Said as her legal guardian at the ceremony.” Wikipedia

Any Pakistani living abroad can have the opportunity of an Online Marriage/Nikah in Pakistan. However, there are certain conditions, requirements and procedure to be met before you plan your online (shadi) marriage in Pakistan.

REQUIREMENT OF THE ONLINE MARRIAGE (NIKAH ONLINE) IN PAKISTAN

WHAT SERVICES WE WILL PROVIDE YOU AFTER PERFORMING ONLINE NIKAH

We provide the below services after conducting your Online Marriage/Nikah Online:

We have clients in: Therefore, it is highly important to hire experienced and professional online shadi (marriage) lawyers. If you hire any unprofessional online nikah/marriage (shadi) lawyer who does not have expertise in Online Nikah/Marriage process, they may misguide you or skip a necessary step. Islamic Nikah online for a Muslim marriage is a sensitive matter, and online nikah (marriage) in Pakistan is more delicate than traditional marriage, because of Islamic Shara’i binding of two sane Muslim witnesses and vakils/attorney/proxies and legal registration of marriage in absentia. of marrying party/parties. So there should be no room for any mistake or negligence.

We perform 3-4 online nikah/online marriage gathering on daily basis for the last several years. Our lawyers and nikah khawans in Karachi, Lahore & Islamabad are the most experienced. Online Muslim Nikah is our speciality! 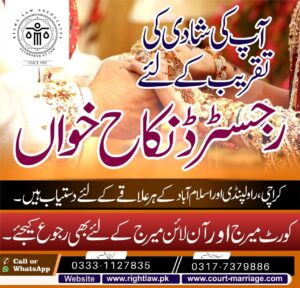 We understand that family legal matters and matrimonial services are sensitive matters in Pakistan; therefore, we take extra measures to protect the client’s rights and ensure their security. Client trust is our utmost priority. We take every case seriously and make sure that our clients get satisfactory knowledge and understanding of the entire legal procedure before they hire us. We have a great clientele portfolio, which is evidence of our professionalism.

Topics We Can Help You With