In this article, we will elaborate on the different sections of a Nikah Nama document and how they can be used both to provide and protect the rights of both participants.

You should not underestimate this dull-looking, often poorly printed document, as it may well be the most important document you will ever hold in your lifetime. There is no looking back once you sign the dotted line, yet most couples only see the document seconds before they become husband and wife. A maulvi, hired to conduct the ceremony, normally fills out the form as he sees fit. Many families leave the actual nikah to the mercy of the maulvi. It is rare for the terms and conditions of the Nikahnama to be considered; couples begin their new lives together unaware of their married rights.

Despite its simplicity, before you sign your Nikahnama, you should take the time to carefully examine it and analyze it. Knowing the Nikahnama can actually help a couple better understand the expectations and responsibilities one has to the other. In order to protect her position in the marriage, it is highly recommended that the bride aligns first stand every detail with her partner. The matter can be protested in court if either party feels that the other party isn’t abiding by the Nikahnama principles at any time during the marriage.

The Nikahnama can contain a variety of other provisions. For instance, many couples determine a monetary allowance which the husband must give the wife every month, thereby further securing her financial status. This amount can be challenged by a wife years after the nikah, taking inflation and her growing needs into consideration. Even in the event of a separation or divorce, some couples agree that the husband will continue to pay the wife a monthly salary. As long as the documents abide by the law, additional clauses are acceptable, such as requiring the groom to prove his first wife has permitted him to marry (in the case of polygamy) or deciding on who will get custody of their children if they split up.

Despite how vital it is, the Nikah nama is almost always left to the very last minute, when both bride and groom have little time to think about it. So, before you work out the details, it would be best for both potential brides and grooms, as well as their families, to take charge and go over it with a fine-toothed comb. Knowing your rights and asking for what you are entitled to is imperative for you.

Here, we will examine the different clauses of a Nikah Nama and how they can be filled in so that both parties’ rights are protected and provided for. 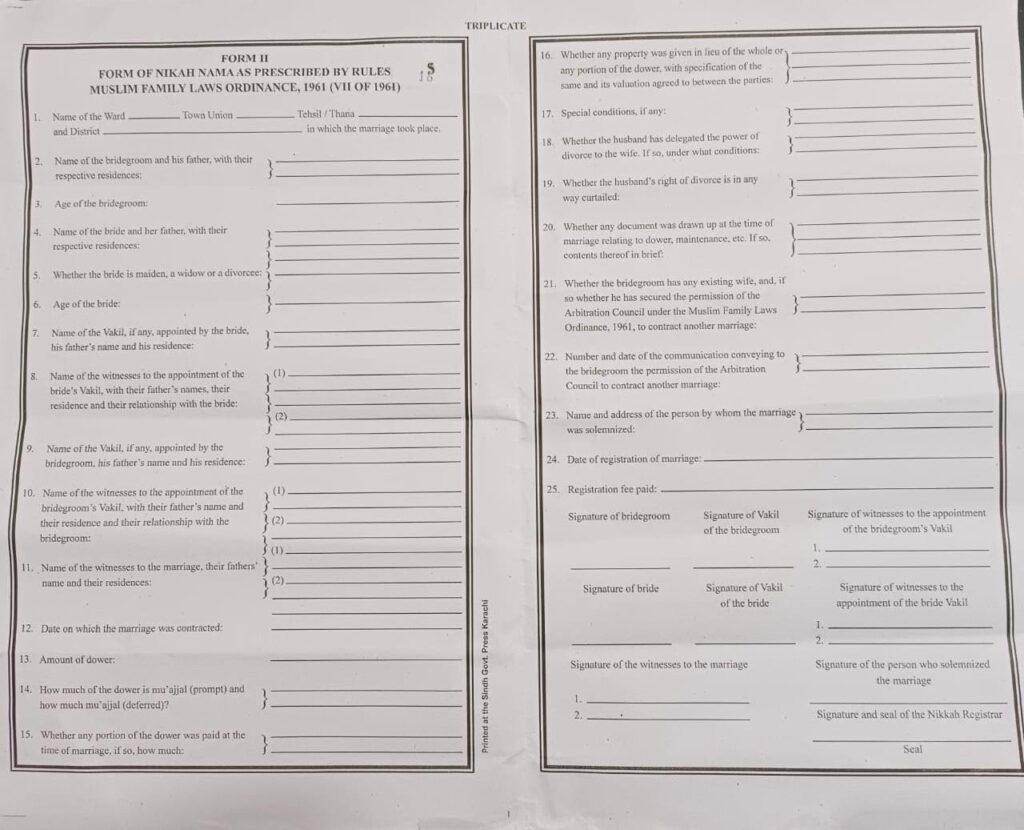 Clause 1 to 6 - Personal Information of the Bride and Groom

Pakistan’s child marriage law relies on this clause to determine illegal child marriages. Various laws govern each province, but generally, a bride must be 16 years old, and a groom must be 18 years old for legal marriage. The Sindh province is an exception, where both the bride and groom must be at least 18 years old to be able to marry. Pakistan currently follows the Child Marriage Restraint Act 1929, except for Sindh. It states as follows:

Although the Sindh Child Marriage Restraint Act, 2013 applies, a child is defined as:
“Child” means a person male or female who is under eighteen years of age”.

Clause 7 to 12 - Attorney, Witness and Convening of Marriage

In these clauses, the bride and groom list the attorneys they have chosen to represent them, as well as the witnesses. These clauses are related to the witnesses that the couple has appointed to be witnesses to their nikah. According to Islamic tradition, the couple chooses an attorney (Wakil) from each side who conducts the ceremony, verifies the witnesses, and measures the stipulated dowry (if applicable). Also, at least two Muslim witnesses must be trustworthy individuals who are not ascendant or descendant of the bride and groom, such as the parents or grandparents. Names, birthdates, addresses, and national identification card numbers of the three representatives are requested, as well as details about the relationship between the bride and groom and their respective witnesses.

The Haq Mahar (or Haq Mehar/Meher) is a gift that the groom must give to his bride in acknowledgment of their marriage, as one of the most important clauses of the Nikahnama. In order to avoid miscommunications at the last minute, the two spouses should discuss and finalize the Haq Mahar (or Haq Mehar/Meher) in advance. However, you should be aware of the Haq Mahar (or Haq Mehar/Meher)’s significance and purpose within a wider context. In points 12 – 17, the document describes the type of payment the families have mutually agreed on, which may take the form of cash, gold or any other valuable item. If there is a specified amount of gold, the bride can automatically claim it as her own from the groom. Until the Nikahnama specifies otherwise, Mehr (or Mehar/Meher) remains a gift to the bride and must be returned to her in the event of a divorce.

In this clause, it is stated whether a part of the Haq Mahar (or Haq Mehar/Meher) is paid up front and if so, how much in value terms.

The purpose of this clause is to determine whether any real estate property was given to the bride as dowry. If so, the value and specifications of the property mentioned here.

The clause specifically refers to any special conditions associated with Haq Mahar (or Haq Mehar/Meher).

Nikahnama includes a clause granting the woman the right to divorce her husband. It is unfortunate that in Pakistan they are often cut off at the time of the Nikah without consulting with the bride.

Clause 18 – Delegation of Power to Divorce

When it comes to this clause, it asks whether the husband has granted his wife the right to divorce and, if so, what are the terms?

Clause 18 of Section 8 of the Marriage Family Law Ordinance (MFLO) allows a husband to delegate his sole right of divorce to his wife. Having the right protects a woman and gives her an option if her marriage isn’t working. In the event that the related section is left blank, she must go to court and file for a Khula, also known as a judicial divorce or dissolution of marriage.

Note: It should be noted that a woman who is granted the right to divorce her husband will still be able to keep her Haq Mahar (or Haq Mehar/Meher) if she divorces her husband. Should the right to divorce not be granted, the wife must ask the court for Khula. Khula is however granted by the court and is conditional on the wife renouncing her Haq Mahar (or Haq Mehar/Meher) in order to qualify.

Clause 19 asks if the husband’s right to divorce has been restricted in any way.

In clause 20, the parties are asked if there is an agreement between them regarding the monthly allowance and the guarantees while they are married. In that case, the particulars can be stated.

The section is usually interpreted as an agreement between the wife and her husband over her monthly allowance, but experts suggest that the division of responsibilities and chores among the couple can also be included, paving the way for a woman to pursue her professional career or education. It’s important in the sense that it can help set the tone for a marriage and prevent any future conflict between husband and wife in terms of roles and responsibilities.

Among the important sections of the Nikahnama is this one. This section asks if a groom is already married or if he has another wife. Whether he has taken the permission of his first wife and submitted proofs of her permission to enter into another marriage.

While a second marriage is not annulled according to Islam when the first wife has not given her consent, under the law it is a criminal offense punishable with a fine and jail time.

Clause 23 to 25 – Particulars of Parties, Signatures and Registration

This part includes, among other things, the details of the Nikah Khawan, the person who performed the Nikah or solemnized it, the Registrar (official) who registers it, the date of the ceremony and the amount of the Govt. registration fee.

Also includes a section for signatures of the bride, groom, witnesses, Nikah Khawan and Nikah Registrar, along with their official seals where applicable.Note: As part of the Muslim Family Law Ordinance 1961, registration of the Nikahnama with the Union Council/Village Council is required along with obtaining a Marriage Registration Certificate (MRC). 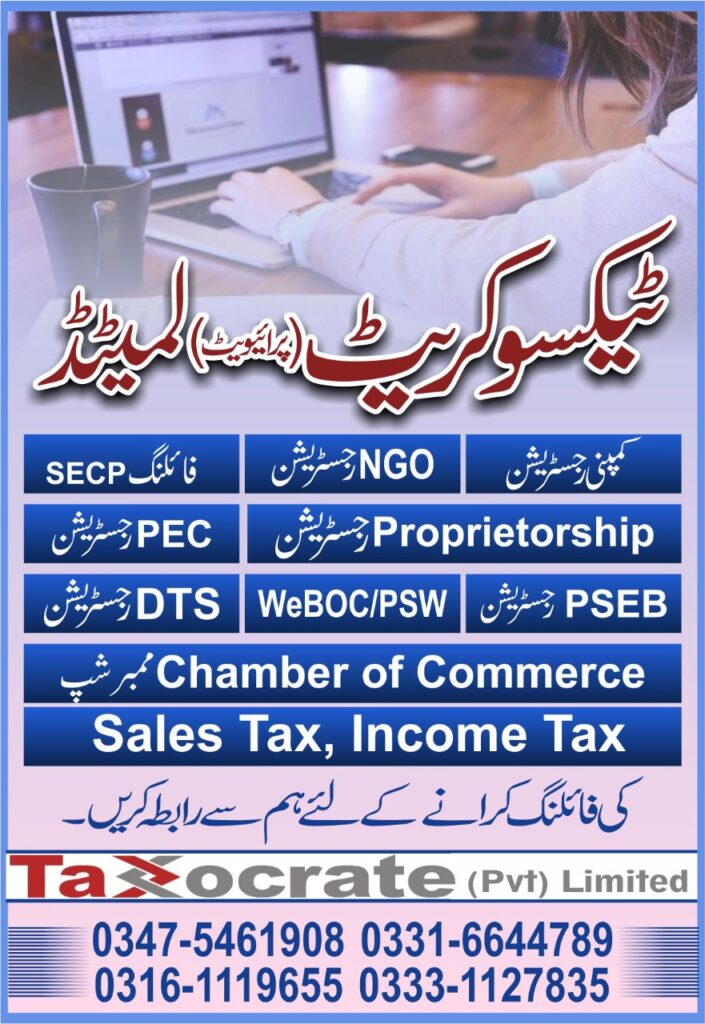